Distinguishing Adenocarcinoma from Squamous Cell Carcinoma of the Lung 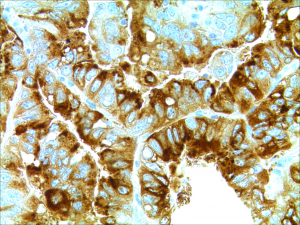 Napsin A staining reveals adenocarcinoma of the lung

At Incyte Diagnostics, we have our own panel of immunohistochemical markers for NSCLC which includes TTF-1, napsin A, CK5, CK7 and p63. TTF-1 and napsin A are the most commonly used stains to support glandular differentiation, which is important to determine a diagnosis of adenocarcinoma. TTF-1 (thyroid transcription factor-1) is known as a thyroid specific enhancer binding protein and is used to determine if a tumor arises from the lung or thyroid.

A positive TTF-1 stain supports a diagnosis of adenocarcinoma originating from the lung. The use of p63 stain is the preferred choice to support squamous differentiation. There can be some overlap in the staining between adenocarcinoma and squamous cell carcinoma, however it is exceedingly rare for squamous cell carcinomas to lack p63 expression. Any amount of p63 positivity along with a negative TTF-1 stain would indicate squamous differentiation.

If a tumor stains positive for both TTF-1 and p63, it is more likely to be an adenocarcinoma than a squamous cell carcinoma because TTF-1 is a more sensitive marker than p63. Cytokeratin (CK) 5 positivity can be seen in undifferentiated large cell carcinoma as well as squamous carcinoma of the lung. CK 7 is valuable to determine some adenocarcinomas. These stains also work well in cytology cell blocks which can be valuable when there is a limited amount of material to test. Correct application of TTF-1 and p63 can avoid misclassification of the tumor.

Lung cancer remains the leading cause of cancer-related mortality in the United States with and 157, 300 deaths and 222,520 new cases diagnosed in 2010 alone. Its diagnosis is challenging for all pathologists, and has become more so as additional special testing is requested on even smaller samples in the diagnosis of non-small carcinoma of the lung. Careful pathologic handling of all tumor material, whether it is surgically resected or minimally obtained, may result in earlier clarification of tumor type. This will lead eventually to better patient care management and eventually improved morbidity rates.